In 1909, F. A. Davis began development of a new town to be named Pinellas Park in what was then Hillsborough County[1], about seven miles north of St. Petersburg. Hoping to draw farmers interested in raising sugar cane and envisioning a prosperous sugar producing industry, he advertised a “the health resort among pines” throughout Pennsylvania.

These early settlers of Pinellas Park, mainly farmers and tradesmen from Pennsylvania, first envisaged the creation of the Sacred Heart Roman Catholic Church. With some financial assistance from the Chicago Extension Society and a grant from F. A. Davis, the developer, plus the physical help from their Baptist and Presbyterian neighbors, the settlers had a start. The church, a mission of St. Jude’s Parish which provided the land, was begun in 1910 and finished the following year. It was located on the site where the Knights of Columbus Council #5737 now stands at 58th Street, south of Park Boulevard. The Mission was a wood frame structure seating fewer than 100 persons and the congregation totaled 53, from nine families.

Among the first parishioners of the new mission church were Mr. and Mrs. Patrick J. McDevitt, Mr. and Mrs. Carr, and Mrs. Emil Kessler, Mr. and Mrs. Frank Gorke Jr., Mrs. William Curran, Mr. Gill Curran and Mr. Harold Brennan. While the church was under construction, Jesuit priests from Sacred Heart church in Tampa celebrated mass in private homes. They came about every two weeks, but occasionally a month would pass because of the heavy mission schedule. It took a day to make a trip from Tampa by boat or horseback.

In 1912 Father Alfred Latiolais, S.J., arrived in Tampa to take charge of the missions which covered an area of 250 miles long by 130 miles wide. On July 1, 1913, Father Latiolais performed the first wedding in the new mission church for the first mayor of Pinellas Park and his bride, Miss Anna D. Balas.[2]

Father Alfred Latiolais, Father James Wallace and Father Andrew Fox were the Jesuit missionaries who came to Pinellas Park most frequently. In fact, Father Wallace managed to celebrate Mass on every Sunday during 1915. Fire seriously damaged the church on April 4, 1917, but with some repairs, services continued to be held there.

For a time, parishioners attended Mass in St. Petersburg. Beginning in 1924, Father Patrick J. Bresnahan, assistant to St. Mary Our Lady of Grace, celebrated Mass in the mission church. This continued until the dedication of St. Paul Catholic Church in St. Petersburg in 1929 when regular Mass was discontinued in Pinellas Park. Shortly after, Father James W. Enright, Pastor of St. Jude’s, had the mission church torn down. The salvageable lumber was sent to St. Paul’s to be used in the erection of a social hall.

The revival of the Parish began in 1951 when Fr. Leo Paul Manning, Pastor of St. Jude’s and through the generosity of Mr. and Mrs. Michael Magnotta- owners of the Royal Palms Trailer Park at 49th Street and Park Boulevard, began to celebrate Mass in the recreation center of the trailer park. This arrangement continued until a new church, in Pinellas Park could be built. Father Walter Mack, a retired priest living in Pinellas Park, and Irish born Father John P. Griffing of St. Jude’s Parish served the mission through these years.

By 1952, the congregation had grown large enough to justify reestablishing Sacred Heart Church. Thirty acres of land were acquired between 46th Way North and 46th Street North from 78th Avenue to 82nd, much of it a palmetto and pine swamp. On August 19, 1955, Monsignor James J. Meehan, pastor of St. Jude, broke ground for the new church (the current Parish Center). Construction began at once. It was sufficiently finished so that the first Mass could be celebrated at Midnight Christmas Eve 1955 by Father John P. Griffin. The new church had a seating capacity of 300. Sacred Heart Parish was canonically established with Father John F. Scully[3] as the first Pastor and 114 families on September 29, 1956.

The Parish grew in numbers so that in 1959 it became necessary to build an addition increasing the seating by 600. The original part of the building became the Parish Hall, separated from the new section by folding doors. If need be, the doors could be open to accommodate 900 worshippers.

The long-range plans of the parish included an elementary school. In early 1958, Fr. Scully established a building fund drive committee. Construction of the school wing consisting of three cement block classrooms and a convent to house five sisters began in July 1959. Sacred Heart Catholic School opened as planned on September 1, 1959 with an enrollment of 50 students for 3 grades.

Father Paul R. Woodyard was appointed Pastor on December 10, 1959 to succeed Father Scully. He served until July 12, 1961 when Father J. Keith Symons assumed leadership of the parish. In 1961, the parish purchased a house on the corner of 80th Avenue and 46th Street for use as a rectory and office. Father James Gloekler succeeded Father Symons.

During the years of 1963 and 1964, Sacred Heart served as the temporary home of St. Theresa Byzantine Church of which Father John Puskar was Pastor. The latter celebrated the Divine Liturgy every Sunday in the school. Also, Father John Lawlor, administrator of the Holy Cross Mission Church, maintained an office in the Sunday Sacristy of Sacred Heart Church from October 1964 until February 1965.

Father Bernard F. Dittman succeeded Father Gloekler as Pastor on August 15, 1968 and served until September 4, 1978. During these years, growth of the church and school continued at a steady pace, much the same as throughout the state of Florida.

In 1971, Sacred Heart held its first Fall Festival as a fundraiser for the school. Max and Alice Wannike served as chairpersons. Tony Mazzella assumed the Chair of the Fall Festival in 1987 and has served in that capacity ever since. In the nearly 50 years since, the 5-day Festival has become a the largest in Pinellas County and a significant community event. The parish later added a 3-day Spring Festival.

Father Alexander D. Rinaldo succeeded Father Dittman as pastor on September 5, 1978. During this pastorate, it became apparent that the current worship space could not keep up with the growth of the Parish. The master plan called for a new church structure to be built north of the current church on vacant land just across 80th avenue and the modification of the current church to serve as a parish hall. The building fund began in December 1982 and the ground-breaking ceremony held two years later, on December 9, 1984 with Bishop Larkin presiding. It took 2 more years for the present-day Church to be built.

The most prominent feature of the Church is the Mosaic behind the altar. Created by the Vatican Mosaic Studio, the work is based on a painting by Virgilio Cassio. The artist made the mosaic in sections placing each piece in a stucco foundation. The numbered sections were then packed and shipped to the church for installation.

Bishop W. Thomas Larkin celebrated the dedication of the new sanctuary on November 16, 1986. Celebrants included the Pastor, Rev. Alexander Rinaldo and about 50 other priests from the diocese. Pinellas Park city officials, Knights of Columbus, members of the building project committees and parishioners attended the service representing nearly 1800 families then registered in the parish.

In 1991, the church purchased a second neighboring home as a residence for the school Principal, Sister Alice. We believe this is the building that now serves as the rectory.

Father Robert McGuire, Father Ralph Argentino, Father James Merkle, and Father John Gerth followed as pastors of the parish. By 2009, the parish had incurred a significant debt due, most likely to a combination of declining Mass attendance, a reduction in weekly offerings, and excessive spending. The school, with lower attendance also became an increased burden on the parish. Father Anthony Coppola assumed the role of pastor in July 2009. During his 9-year tenure, with strict management and a debt forgiveness plan from the diocese, the parish returned to solid financial footing.

Fr. Kevin Yarnell began his leadership of the parish on July 1, 2018. The financial stability, well maintained physical plant, excellent staff, and many faithful volunteers allows the parish to confidently embrace our diocese’s shared vision, “Courageously Living the Gospel.” Over the next two years we will seek to follow God’s leading in service, stewardship, family ministry, evangelization, and youth ministry. In doing so, we will be living out our call to be disciples of Jesus and also honor the legacy of those who, in the past, gave so much to Sacred Heart.

[1] Pinellas County did not exist as yet. It was not created and approved as a county until November 4, 1911.

[2] Another source gives June 10, 1913 for the wedding date and refers to groom as “an early” mayor, rather than the first. 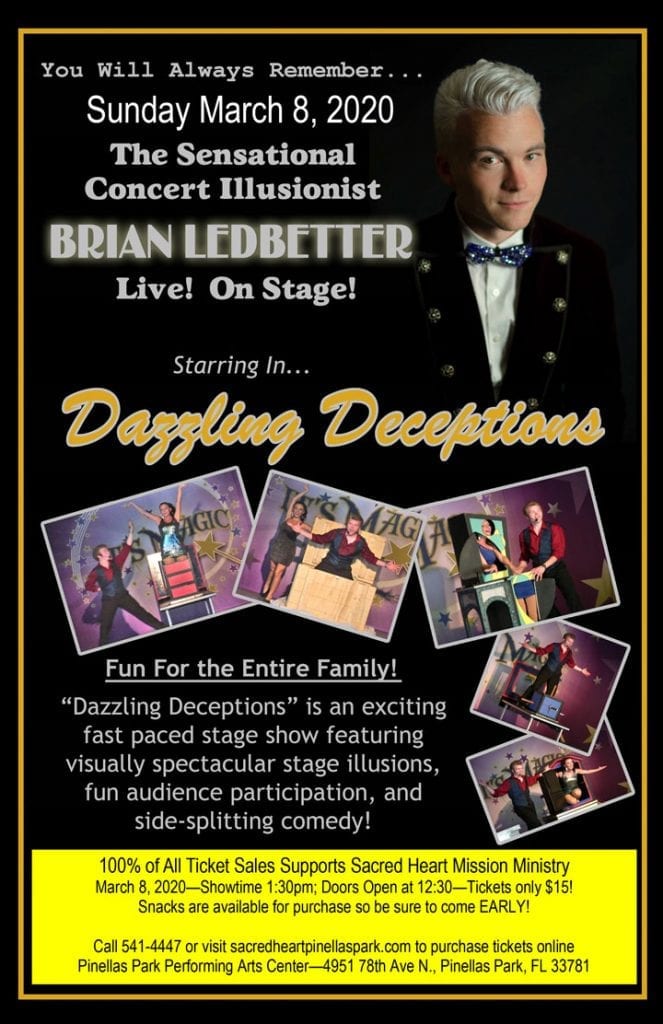